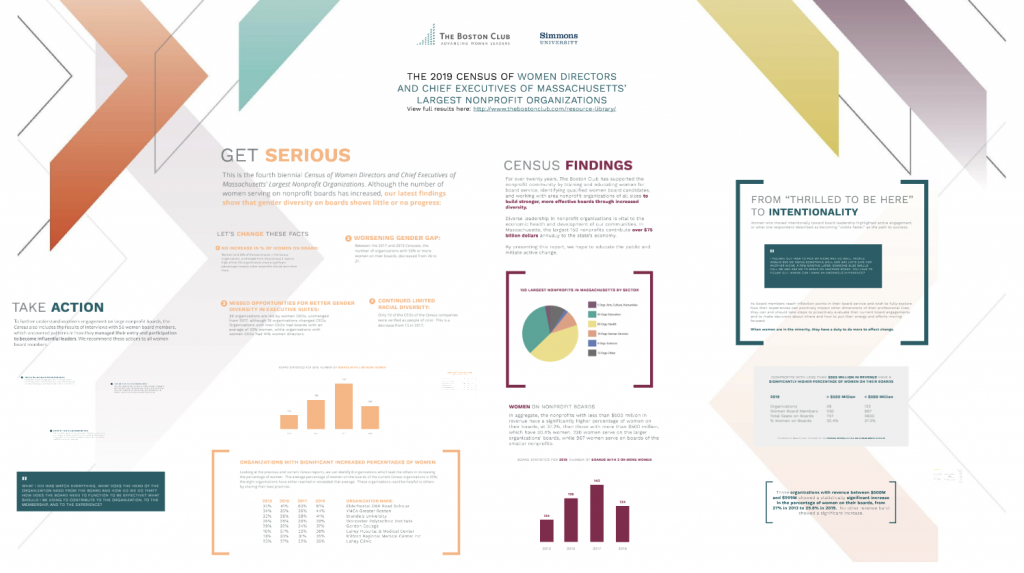 The Boston Club’s 2019 Nonprofit Board Census

The largest 150 nonprofits in Massachusetts show no meaningful progress in the number of women CEOs and the number of female board members, according to “Opportunities Abound, Intentionality Needed,” The Boston Club’s 2019 Census of Women Directors and Chief Executives of Massachusetts’ Largest Nonprofit Organizations. On average, women hold 35% of the board seats in the Census organizations, the same percentage reported in previous three biennial reports.  Each of the Census organizations has at least one woman on its board, also unchanged from the past two Census reports.

The research, presented at a breakfast at the Westin Copley, found that among the very largest organizations in the Census report, those with more than $500 million in revenue, the percentage of women on the board is even lower, 30.4%, while below that revenue point the percentage rose to 37.2%.

“We were pleased to identify eight organizations among the 150 that lead the others in increasing the percentage of women on their boards since we began the Census: Elderhostel DBA Road Scholar, YMCA Greater Boston, Brandeis University, Worcester Polytechnic Institute, Gordon College, Lahey Hospital & Medical Center, Milford Regional Medical Center Inc., and Lahey Clinic,” noted Beverly Brown, Chair of The Boston Club’s 2019 Nonprofit Board Census Committee.

The 2019 Census includes two qualitative research reports, one developed by Babson College interviewing 39 women directors, and one produced by The Boston Club that interviewed 17 Boston Club members who serve on major nonprofit boards. Both reports confirm the importance of board members’ own active and structured management of their entry and participation into nonprofit board work to their effectiveness and progression in their roles. The reports describe directors’ “intentional” actions, such as working to become “visible faster” in order to maximize opportunity and success.

Key findings of the Census, produced by Simmons University, include:

The Census was presented at The Boston Club’s 2019 Community Salute, “Collaboration Goes Global; Leveraging Effective Multisector Partnerships,” which included the presentation of the 2019 Advancement Award to Girls on the Run Greater Boston and an interactive discussion with Abby Maxman, President & CEO of Oxfam America, moderated by Lauren Smith, Co-CEO of FSG.

Methodology: Annual revenue is the primary criterion for inclusion in the list of the largest 150 nonprofits. The Census was produced by Simmons University using data submitted by public charities in Massachusetts to the IRS, specifically, 2016 forms 990 via GuideStar as of November 5, 2018.

The Boston Club is a community of women business and professional leaders that promotes the advancement of women into significant and visible leadership roles. Our ambition is to have lasting and meaningful impact on business performance and the economic health of our communities. We connect and enrich women leaders from a diverse set of backgrounds and experiences. We measure the progress of women in corporations and nonprofit organizations, place women on corporate and nonprofit boards, celebrate organizations that elevate women leaders, and engage in public discourse about the importance of the issues. Research plays an integral part in The Boston Club’s mission, focusing attention on the identification and development of a vital pool of women’s expertise for leadership positions.